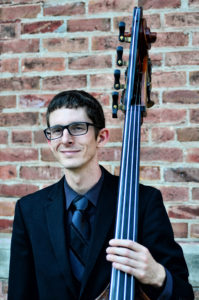 Bobby hadn’t always wanted to play in the orchestra.

Bobby Scharmann, who won the assistant principal bass position with Lincoln’s Symphony Orchestra’s last fall, realized his aspiration for the concert stage while studying for his master’s in Jazz Studies at Indiana University Bloomington.

As part of his performance studies, he auditioned for one of IU’s four full sized orchestras, and was placed in one of the sections, next to an orchestral performance major.

“We were playing Beethoven’s Fifth one day,” Scharmann said, “and all I could think was, ‘Oh my god, the sound coming out of his bass!’” From that moment, he knew he needed that sound.

“It was really the catalyst that got me to say that I want to be an orchestral player.” Scharmann had found his musical voice.

Now, Scharmann plays with both the Omaha and Lincoln symphonies. And while he lives in Omaha (and is enjoying playing more freelance jazz), he loves coming back to Lincoln to play with Lincoln’s Symphony Orchestra.

“There’s something about this orchestra… there’s definitely a very strong sense of community. There is a really familial feel.” Oftentimes, he said, it feels less like a job and more about getting together with close friends and family to create powerful and emotional musical performances.

“The last time I really felt that strongly,” he said, “was in February 2017 when we had the whole spiel with Zuill Bailey getting sick before the performance. And Anton Miller, our concertmaster, simply said, ‘Hey, I’ll just play this!’”

And suddenly, the Lalo’s Symphony Espagnole appeared on the entire orchestra’s music stands – the evening of the final dress rehearsal before the concert.

“And nobody,” Scharmann said, “complained about the overtime or the repertoire change or anything.

“We all just did it. If it came to it, we would have played that concerto on the night of the concert.”

In fact, Lincoln’s Symphony Orchestra did play that concerto – at least, one movement of it. Zuill Bailey himself welcomed Anton Miller back to the stage after the orchestra’s rousing performance of Dvorak’s Cello Concerto in B minor, giving him an encore performance with the final movement of the Lalo the orchestra had so quickly prepared the night before.

That, Scharmann shared, is a true testament to not only the high musical caliber of the orchestra, but also each musician’s commitment to the music – and to each other – in creating both inspiring and exhilarating musical experiences together, on and off of the stage.