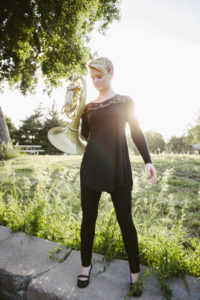 Kaylene Beal Diaz picked up the horn in fifth grade because it looked cool, sounded cool, and no one else was doing it. “I liked to be the different one in fifth grade,” she laughed. She was definitely into it from the start. “I’d lock myself in my room and practice. I had a book full of Star Trek themes, and a book of various movie themes. I think music from Star Trek and Apollo 13 really taught me how to play the horn.”

Moving on through high school, Beal continued to enjoy playing horn, but didn’t consider it as a career. As a National Merit Scholar and avid writer, she was curious about careers in journalism or writing. It wasn’t until she played in an Illinois All-State Orchestra as a junior, performing Richard Strauss’ famous tone poem Don Juan, that she began to consider a career in music.  “I was in a great horn section, and I had never played Strauss before. Introducing that to a 16-year-old was amazing. The feel you get from playing, and the rush you get from performing that was incredible. I loved being in rehearsal; it was exciting. I think Don Juan was a gateway to the orchestra world for me.”

As an undergraduate at the University of Alabama, Beal majored in horn performance, and ended up getting three music degrees. In 2015, while pursuing her Doctor of Musical Arts at the University of Nebraska-Lincoln, she joined Lincoln’s Symphony Orchestra as Second Horn. “I love the camaraderie at LSO; it’s very personal and connected. All the musicians are friendly and supportive with each other and the conductor, and vice versa.”

Beal’s involvement with the LSO doesn’t just stop at playing horn. At the beginning of the 2018-19 season, she became Orchestra Manager. She has several responsibilities in this position; in addition to being the Personnel Manager, where she hires musicians and administers payroll, she is also the Orchestra Librarian (preparing music for all services) and Operations Manager (securing venues and equipment, and creating stage plots).  It’s not only work she likes, but work she loves.  “I am very detail-oriented, and I get a lot of pleasure out of putting folders together, getting music in order, and checking off all the boxes for concerts. I feel even more connected to the symphony, and the musicians. I like being a liaison between the administration and the musicians, because I am a musician; I know what their needs are, and I want to help meet them. I want to make the experience ideal for everyone.”

For Beal, that experience is highly satisfying. “You get a sense of everyone working towards a common goal, all the time. I get a sense of family here. When you go to rehearsal, it feels like you’re not just going to a job, but you’re going to make something beautiful with people you really like.”