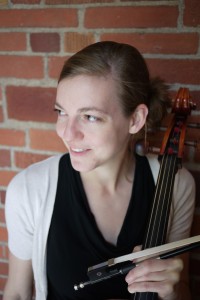 Jessica Dussault has been playing cello since 4th grade. She began her studies with Tracy Sands, during which time Jessica was a Nebraska All-State principal chair and Nebraska Young Artist Award winner.  She toured Austria in 2005 with the Lincoln Youth Symphony, a group with whom she also played a concerto as a senior soloist in 2006.

Jessica studied with Karen Becker at the University of Nebraska-Lincoln (UNL) where she received a BA in Music and History.  Jessica took part in the premieres of compositions at two Society of Composers, Inc. conferences and in 2008, she performed at Carnegie Hall with the UNL Philharmonia Orchestra.  She has had the privilege of playing in master classes and coachings with Darrett Adkins, Bonnie Hampton, the Chiara Quartet, and Yo-Yo Ma.

In 2012, Jessica received her MSc in Digital Humanities from University College London where she studied computer music with Dr. Nicolas Gold.  Her dissertation, “Live Coding Music: Self-Expression through Innovation,” explored why and how live coders create their own environments for composing and performing.  This work was presented at the 2013 Digital Humanities international conference.

Jessica began playing with Lincoln’s Symphony Orchestra at the age of 18 and continues to play with them today.  She has performed with the Nebraska Chamber Players in both Nebraska and Kansas, once for an audience of pelicans.  In 2013, she helped to form the Primrose Quartet, a group which has enjoyed collaborating with guests artists, recording with local composers, and accompanying enthusiastic carolers.

In an unexpected turn of events, Jessica became a software developer in 2012.  She currently works at the University of Nebraska-Lincoln as a programmer for the Center for Digital Research in the Humanities.  She and her cello Kip Austin enjoy sightreading, listening to Corelli, and working on contemporary music.