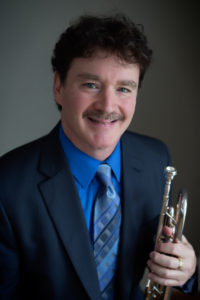 Thomas Kelly, trumpet, received his undergraduate degree in trumpet performance and music education at Winona State University (Winona, MN.) and a Master’s degree in trumpet performance from the University of Nebraska-Lincoln while studying with the late Denny Schneider. Kelly has performed with the Empire Brass, Canadian Brass, Dallas Brass, Rhythm and Brass, Manheim Steamroller as well as having been a member of orchestras backing performers such as Ray Charles, Steve Allen, Red Skelton, Ben Vereen, Michael Buble’, Gladys Knight and Marie Osmond, the Temptations and Idina Menzel. Kelly is also Principal trumpet and Personnel Manager of The Plymouth Brass at First-Plymouth Church here in Lincoln, is a member of The Palladium Brass in Omaha, performs often with the Omaha Symphony Orchestra and then first played with The Lincoln Symphony in 1989! Tom has a private studio in Lincoln and is the Instructor of Brass at Doane University in Crete Nebraska and instructor of Trumpet at Concordia University in Seward Nebraska. He and his wife Angela have two children, Jonah who is a freshman at Baylor and Allison who is in the 9th grade at Lincoln Southeast High School. A highlight for Jonah and Tom happened in Omaha in September of 2015 where they were able to perform “The Tonight Show Theme” on stage with Doc Severinsen!