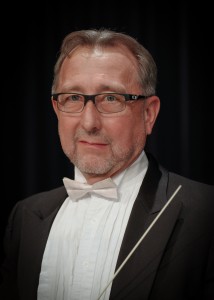 Terry R. Rush just retired from 35 years as a high school orchestra, band and jazz band instructor. His last position was Instrumental Music Director at Lincoln Southwest High School. He was the Director of Instrumental Music at Lincoln High School for twenty-five years. His groups have traveled to Florida, Colorado, California, Kansas, Missouri, Illinois and London, England as well as performing at the State Bandmasters Association State Convention numerous times. Prior to teaching at Lincoln High School, Mr. Rush taught at Pius X High School for five years. He has been a member of the Lincoln Symphony for 40 seasons and the Lincoln Municipal Band for 42 years serving as principal trombone as well as guest soloist. In 2001 Mr. Rush was appointed Assistant Director of the Lincoln Municipal Band. In 2002 he was appointed Assistant Music Director of the Lincoln Youth Symphony which has traveled to China, Hungary, Austria, the Czech Republic and Italy during his tenure.

Mr. Rush is a past officer on the board of the Nebraska State Bandmasters Association. He is a past winner of the Donald A. Lenz Outstanding Nebraska Bandmaster, recipient of the John Philip Sousa Foundation National Legion of Honor Award and the Nebraska National Guard Medal of Freedom for his support to military music programs. Mr. Rush is the 2010 recipient of the Lincoln Symphony Golden Baton Award.

Mr. Rush and his wife Jacqueline, also a band director with Lincoln Public Schools, have three children, Ben, a Computer Developer and Programmer, Stacey, recently out of the United States Army Music program and Rob, an Iraqi Veteran stationed at Fort Benning, GA with the United States Army.