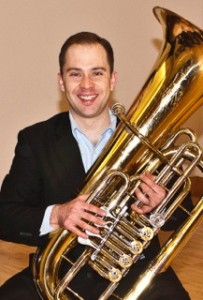 Golden Lund began his tenure with the LSO in 2009 when he began his doctoral program, studying tuba with Craig Fuller (Principal Tuba, Omaha Symphony).  He has three degrees in tuba performance: a Bachelors of Music from the University of Utah, a Masters of Music from Indiana University, and a Doctor of Musical Arts from the University of Nebraska-Lincoln.  Dr. Lund’s musical training is extensive, as he has studied with some of the finest tuba performers and teachers in the world including Daniel Perantoni, Warren Deck, and Gary Ofenloch.  His studies have included two summers at the Aspen Music Festival and one summer at the Round Top Music Festival.  While attending the University of Utah Golden performed with the Utah Symphony and Orchestra at Temple Square.  After leaving Salt Lake City, Dr. Lund won a one-year position with the Louisiana Philharmonic where he performed as principal tubist for the 2006-2007 season.  While in Indiana, Dr. Lund was a highly sought after tubist performing frequently with 4 different regional orchestras.  In addition to his principal position in the LSO, while in Lincoln Dr. Lund frequently performed as a substitute in the Omaha Symphony.  Golden now resides in the quad cities area in Iowa with his wife and 1-year-old twins.