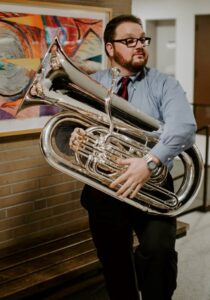 Kevin Madden became the Audience Services Manager for Lincoln’s Symphony Orchestra in December of 2021. Kevin is responsible for all the front-of-house operations at LSO including box office and subscriptions.

Kevin has a B.M. in Tuba performance from Ithaca College in Ithaca, NY and pursued graduate studies in tuba at the University of Nebraska – Lincoln, earning his D.M.A in August of 2020. Prior to joining LSO, Kevin worked for Arts Incorporated in Lincoln, managing the Nebraska Brass. Dr. Madden is the Adjunct Instructor of Low Brass at Union College in Lincoln, and Concordia University in Seward. He is also a regular free-lance tubist in the Lincoln and Omaha areas and has performed with the Nebraska Brass, Lincoln Municipal Band, Lincoln’s Symphony Orchestra, and Omaha Symphony Orchestra.