From the LSO to the LSO 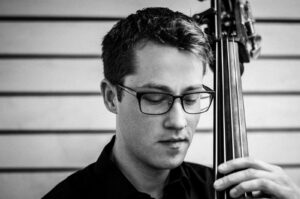 In March 2019, the Principal Bass player for Lincoln’s Symphony Orchestra, Mike Swartz, sat in front of his computer and had one of the most fulfilling experiences a musician can enjoy—and he wasn’t even on stage. Three thousand miles away, one of Swartz’s former students was performing as Principal Bass with the London Symphony Orchestra in a concert streamed live around the world. That student was Sam Loeck, a Lincoln native and University of Nebraska graduate whose passion and talent as a double bass player has taken him from Lincoln to London and everywhere in between.

It may come as a surprise that in the beginning, playing bass wasn’t even Sam’s idea. In fourth grade, a friend asked him to join orchestra so they could take the class together. After a year, that friend lost interest—but Sam was hooked.

He joined SAIL (Strings Alliance in Lincoln), a week-long camp held every summer for beginning string players. It was at SAIL Camp that Sam met and began studying privately with Mike Swartz, who could tell right away that this eight-year-old had a rare talent.

“Sam obviously was very gifted,” Swartz says. “I don’t think Sam even knew just how good he was.”

Perhaps that is why, before entering college, Sam originally planned to major in mathematics. Fate intervened during his senior year of high school, when Swartz received a proposition from the Symphony Orchestra Academy of the Pacific, a Canadian summer music clinic.

“They offered a full scholarship without audition to a highly-qualified student based on my recommendation,” Swartz says. He encouraged Sam and his parents to take advantage of the opportunity. They did so, and as Swartz says, “The rest is history!”

Sam remembers the Canadian workshop as an eye-opening experience. “It was my first experience of music-student life,” he says. “Being around so much music-making and talking to so many excited musicians convinced me to switch majors and study music.”

As a freshman at the University of Nebraska-Lincoln, Sam joined the double bass studio, where he studied privately with Dr. Hans Sturm and performed with the music school’s flagship ensembles.

Sam’s work ethic and passion for music shone through at UNL. Sturm describes him as a voracious student who devoured the bass literature, including etudes, orchestral excerpts, solo repertoire, chamber music, and jazz—performing everything with sensitivity and ease. “Sam is a once-in-a-blue-moon student,” Sturm remembers. “Within two weeks he had, for instance, not only digested the Galamian ten-arpeggio sequence from memory, but had already begun to apply it in different keys with bowing and rhythmic variations.”

To this day, Sam remains the only bassist to ever have won the UNL Concerto Competition, selected from a talented pool of undergraduate students. But it’s not all-work, all-day for him. He also listens to funk music and Radiohead and Kendrick Lamar, and he was the mastermind behind UNL Bass Studio Taco Tuesdays.

So, Sam is proven to be a versatile artist; but what does he enjoy playing the most?

“I think if I had to play only one style of music, it’d be baroque or early classical,” he decides, citing basso continuo parts and Haydn symphonies as examples. “This writing is exactly what the bass was invented to do. It provides the harmonic and rhythmic structure, and can shape and influence the direction of the whole ensemble.”

While at UNL, Sam also won his first position with Lincoln’s Symphony Orchestra, and performed in the double bass section for four years.

“My best LSO memory has to be my first concert,” Sam says. “That concert struck me as different, a more professional experience than student performances.” The concert featured LSO’s Principal Viola Clark Potter on Ralph Vaughan Williams’ Flos Campi, as well as Beethoven’s iconic Fifth Symphony; a memorable program, indeed. 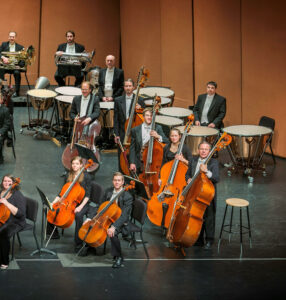 The repertoire wasn’t the only high point of Sam’s years with LSO. “It was a blast playing in the bass section with Mike as principal,” Sam remembers. “I’d studied with him for so many years. Being on stage in the same orchestra was incredibly exciting.”

Swartz wholeheartedly agrees: “It is a teacher’s greatest joy to see students love to play and succeed. Playing alongside Sam was great fun!”

In addition to studying at UNL and performing with LSO, Sam attended music festivals all over the world, including the Aspen Music Festival in Colorado; the Mortizburg Festival in Dresden, Germany; and the Pacific Music Festival in Sapporo, Japan. After graduating, Sam earned a place in the world-renowned and highly selective studio of Bruce Bransby at the Indiana University Jacobs School of Music.

“IU was a really outstanding place to be a bassist,” says Sam. “That school has a history of producing great orchestral players. In fact, I was one of the weaker players there when I first started, which was a good learning experience for me.”

Sam thrived in the environment. In his second year at Indiana, he won an audition with the Chicago Symphony, securing him a place on their list of substitute musicians. Immediately after graduating, Sam won a position as Principal Bass with the Calgary Philharmonic.

The good news didn’t end in Canada. In 2019, Sam earned the opportunity to perform with the London Symphony Orchestra as part of a trial period through which London will select a new Principal Bass. “The LSO’s hiring process is quite long-winded,” Sam explains. “It’s not uncommon for candidates to be brought back several times over the course of a year or two before a final decision is made.”

In March, Sam performed a string of concerts including audience favorites by Shostakovich, Tchaikovsky, and Richard Strauss, and even recorded several sessions for upcoming video game soundtracks. “That’s the thing about the LSO,” Sam points out. “They’re an extremely busy orchestra. Many of their weeks have twice as many services scheduled as a typical American ensemble.”

Fortunately, among a jam-packed schedule, one of those March concerts streamed live all over the world. It aired in the middle of the afternoon to its Nebraska audience: Sam’s parents and family, former teachers Swartz and Sturm, and friends and classmates from Lincoln. 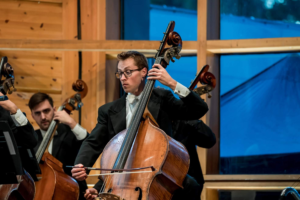 “I enjoy following his performances with the ‘other’ LSO via live stream,” says Swartz. “I have to say, it is surreal to see him standing in front of that famous bass section.”

So, where will we see Sam next?

“I’m actually back in London right now!” he says. His second trial period began in August of 2019, and he is scheduled to rejoin them several times through December. “A few days ago, we performed for the BBC Proms, which might be on YouTube soon. In a few days, we start rehearsals for a tour to Latvia and Hungary.”

Lincoln, London, Latvia—Sam Loeck is making his mark all over the world, soaking up the experiences and sharing his passion for music. Someday he may hold a full-time job with the London Symphony—but for now, he is just thrilled and honored to have the chance to play with one of the world’s greatest orchestras.

Next time you’re browsing for a good orchestral recording, keep an eye out for the “other” LSO—you might find a YouTube video of Lincoln native Sam Loeck performing at Royal Albert Hall.