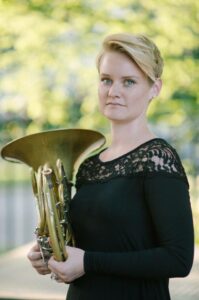 Kaylene Beal joined LSO’s administrative staff at the beginning of the 2018-19 season. She handles all details pertaining to the orchestra personnel, including the music library, personnel management, and concert production. In 2017, she received her DMA in Horn Performance from the University of Nebraska, where she was a Graduate Teaching Assistant and Hixson Lied Fellow. During her studies, she earned a Hixson Lied Grant to travel to Florence, Italy in 2017, where she participated in Italian Brass Week and studied with members of the Berlin Philharmonic, Chicago Symphony Orchestra, and the Maggio Musicale Fiorentino. In 2013 and 2015, Kaylene participated in the National Music Festival, performing in the festival orchestra under Maestro Richard Rosenberg and attending Arts Administration masterclasses led by Caitlin Patton.