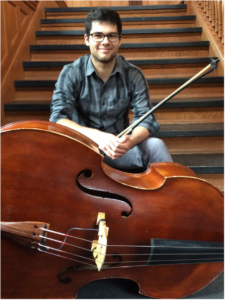 Stephen Cantarero is a double bassist and educator native to Lincoln, Nebraska. At the age of 10, he started playing music on the bass guitar and eventually found a love for the double bass in high school. During his time playing bass he has performed with wind ensembles, choirs, big bands/jazz combos and orchestras in school as well as rock, funk, latin, pop bands and theatre productions outside of academia. He is a current member of Mobius, an original jazz influenced alternative rock group and is also a part of Jarana, a flamenco influenced Latin pop group which are both based in Lincoln, Nebraska. Classical music has been the main focus of his musical journey and he now holds a section position with Lincoln’s Symphony Orchestra. He is passionate about a diverse array of musical genres and loves performing all types of music.

Cantarero has taught private lessons in classical, jazz, and popular musical settings and has been on staff at the LPS strings summer music camp with Del Whitman at Lux Middle School. He also teaches 4th and 5th grade beginning strings at Park Middle
School as a part of the UNL/LPS String Project with master teacher Dottie Ladman, and director Karen Becker.