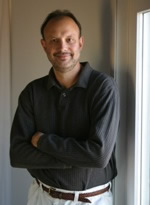 Jay Wise has been the principal trombonist of Lincoln’s Symphony Orchestra since 2004, and has been the bass trombonist of the Omaha Symphony since 1987.  He also performs on tenor and alto trombones and euphonium.  For the past several years he has also served as Principal Trombone of the Lincoln Symphony, and has performed with orchestras in Cedar Rapids, Iowa, and Midland, Texas, and festivals in Flagstaff, Ariz., and Fayetteville, Ark.

He earned his bachelor and masters of music from Northern Arizona University, and his doctorate from the University of Iowa.

As a free-lance musician, he has performed with Bob Hope, Red Skelton, Lou Rawls, The Temptations, Natalie Cole, The Four Freshmen, Frank Sinatra Jr., Joel Gray, Pam Tillis and many other entertainers, and has recorded with the Nebraska Jazz Orchestra and various American Gramophone artists. The past two summers, he has participated in Hal France’s innovative “Blue Barn” Festival.

Jay lives in the rolling hills of Mills County, Iowa, with dobermans Trooper and Emma and enjoys working on his ’65 Chrysler Newport and ’50 Farmall “H”.